Pityriasis versicolor is a superficial fungal infection of the stratum corneum, due to dimorphic yeasts of the genus Malassezia, leading to hypo- or hyperpigmented macular lesions on seborrheic areas of the trunk.

Eruption is most common in the summer months in adolescents. Often has a relapsing nature requiring frequent treatment or prophylaxis.

Primarily a clinical diagnosis that is confirmed by a KOH preparation demonstrating fungal elements with a characteristic spaghetti-and-meatballs appearance indicating the presence of both yeast and short hyphae.

After successful treatment, remind patients that it may take up to 6 weeks before their normal skin pigmentation returns.

Recurrence of the disease is common, and prophylactic treatment with selenium shampoo and, for more extensive disease, systemic therapy with antifungal drugs may be necessary.

Pityriasis versicolor (PV), also known as tinea versicolor, is a common superficial fungal infection of the stratum corneum (outer layer of the epidermis) resulting from a change to the mycelial (filamentous fungus or mould) state of dimorphic yeasts of the genus Malassezia. It leads to hypo- or hyperpigmented coalescing scaly macules on the trunk and upper arms. The eruption is most common in the summer months in adolescents and young adults, favors oily areas of the skin, and often has a relapsing nature requiring frequent treatment.[1]Schwartz RA. Superficial fungal infections. Lancet. 2004 Sep 25-Oct 1;364(9440):1173-82. http://www.ncbi.nlm.nih.gov/pubmed/15451228?tool=bestpractice.com [2]James WD, Berger TG, Elston DM. Andrews' diseases of the skin: clinical dermatology. 10th ed. Philadelphia, PA: Elsevier; 2006. 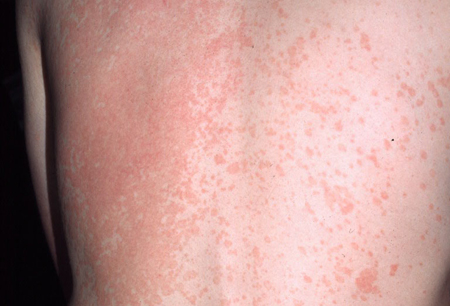 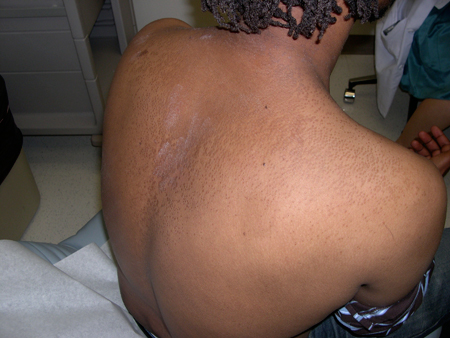