Noninvasive cancer that originates in lobules or ducts.

Typically asymptomatic and diagnosed at screening.

Screening is recommended by most organizations issuing guidelines, in all women aged ≥40 years with annual bilateral mammography.

Diagnosis is with mammography, supplemented with other imaging, such as ultrasound or magnetic resonance imaging, and biopsy.

Some patients may decide to have preventive bilateral mastectomy.

There are different approaches. Margin width remains something that is debated.

Breast cancer in situ is cancer that is confined to the duct or lobule in which it originated and does not extend beyond the basement membrane. The cancer does not have access to distant spread through lymphatics or the bloodstream. Ductal carcinoma in situ (DCIS) is a potential precursor of invasive carcinoma and suggests that cancer will become invasive at that site.[1]Hieken TJ, Cheregi J, Farolan M, et al. Predicting relapse in ductal carcinoma in situ patients: an analysis of biologic markers with long-term follow-up. Am J Surg. 2007;194:504-506. http://www.ncbi.nlm.nih.gov/pubmed/17826066?tool=bestpractice.com 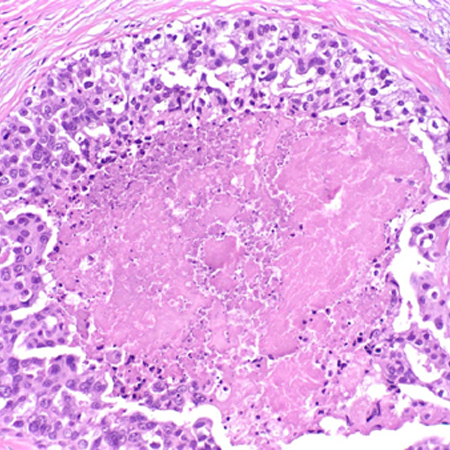 [Figure caption and citation for the preceding image starts]: Lobular carcinoma in situFrom the private collection of Dr Sauter; used with permission [Citation ends]. Whereas DCIS predicts an increased risk of invasive ductal carcinoma developing at the site of a biopsy demonstrating DCIS, LCIS implies increased risk of invasive ductal or lobular carcinoma developing in either breast.[2]Cocquyt V, Van Belle S. Lobular carcinoma in situ and invasive lobular cancer of the breast. Curr Opin Obstet Gynecol. 2005 Feb;17(1):55-60. http://www.ncbi.nlm.nih.gov/pubmed/15711412?tool=bestpractice.com LCIS does not behave physiologically like cancer: cancer may never form, but LCIS is nevertheless a marker for increased risk. Similarly, a finding of LCIS does not imply that cancer will form at the diagnostic site. Consequently, treatment for LCIS is less formalized than for DCIS. 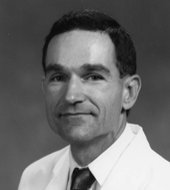 ERS is an author of a reference cited in this monograph.

Dr Edward R. Sauter would like to gratefully acknowledge Dr Rachel L. Ruhlen, a previous contributor to this monograph. RLR declares that she has no competing interests.

CB is an author of a number of references cited in this monograph.

Assistant in the Division of Medical Oncology

AB declares that she has no competing interests.

KV declares that she has no competing interests.

GTN is a principal investigator for the IBIS-II trial, and is an author of a guideline cited in this monograph.