Hyperkalemia is most commonly due either to high intake of potassium in the setting of decreased renal excretion or to extracellular redistribution of potassium from intracellular locations. There is a limited correlation between an elevated serum potassium value and an excess in total body potassium stores. Clinical manifestations of hyperkalemia are uncommon with values <6.0 mEq/L (<6.0 mmol/L).

Common acute manifestations of significant hyperkalemia include muscle weakness and ECG changes, with the latter having the potential to progress to a life-threatening arrhythmia.[1]Mattu A, Brady WJ, Robinson DA. Electrocardiographic manifestations of hyperkalemia. Am J Emerg Med. 2000;18:721-729. http://www.ncbi.nlm.nih.gov/pubmed/11043630?tool=bestpractice.com [Figure caption and citation for the preceding image starts]: ECG changes in patients with hyperkalemiaBMJ 2009; 339:b4114. Copyright ©2009 by the BMJ Publishing Group [Citation ends]. 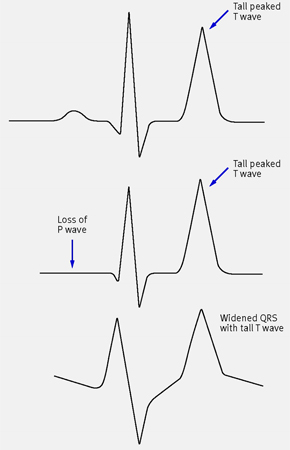 Significant hyperkalemia represents a medical emergency, and an ECG should be obtained to establish whether cardiotoxicity is present. Continuous ECG monitoring should occur until serum potassium values have been brought into a safe range and cardiotoxicity has resolved.