Clinical presentation is often asymptomatic, but can manifest in a number of ways.

A painless ulcer (chancre) in the anogenital region is a hallmark of primary infection.

Diagnosis is usually straightforward after clinical exam and serologic tests. Treatment is with penicillin.

Untreated syphilis facilitates HIV transmission and causes considerable morbidity, such as cardiovascular and neurologic disease, as well as a congenital syndrome in the newborn.

Syphilis in pregnancy is a major cause of miscarriage, stillbirth, and perinatal morbidity and mortality in some parts of the world.

Syphilis is a sexually transmitted infection caused by the spirochetal bacterium Treponema pallidum, subspecies pallidum. It is found only in human hosts. Acquired infection is transmitted through direct person-to-person sexual contact with an individual with early (primary or secondary) syphilis. Most sexual transmission of syphilis probably occurs from direct contact with syphilitic lesions on the genitals or mucous membranes. Transmission from mother to fetus during pregnancy causes congenital infection. Syphilis has often been described as the great imitator because many of the symptoms and signs are difficult to distinguish from other diseases.[1]Baughn RE, Musher DM. Secondary syphilitic lesions. Clin Microbiol Rev. 2005 Jan;18(1):205-16. http://cmr.asm.org/content/18/1/205.full http://www.ncbi.nlm.nih.gov/pubmed/15653827?tool=bestpractice.com 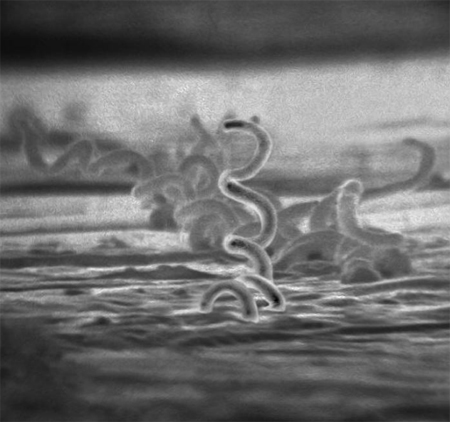 JCS is the author of references cited in this topic.

NB declares that he has no competing interests.

AC declares that she has no conflicting interests.

Dr Juan C. Salazar, Dr Nicholas Bennett, and Dr Adriana Cruz would like to gratefully acknowledge Patrick French and Nooshin Barmania, previous contributors to this topic. PF is an author of a reference cited in this topic. NB declares that she has no competing interests.

RAL declares that he has no competing interests.

WR declares that he has no competing interests.

JH declares that she has no competing interests.