The most common shockable rhythms associated with cardiac arrest are pulseless ventricular tachycardia and ventricular fibrillation.

The most common underlying causes are ischemic heart disease and myocardial infarction.

Presentation is usually sudden and manifests as loss of consciousness but can be preceded by chest pain or dyspnea.

Treatment is through implementing the algorithms for basic and advanced cardiac life support, depending on the provider’s level of training.

The overall survival from cardiac arrest, especially unwitnessed, is poor and, among early survivors, is fraught with complications of many organ systems due to ischemic injury (i.e., multisystem organ failure).

This monograph covers cardiac arrest in adults. Sudden cardiac arrest is a sudden state of circulatory failure due to a loss of cardiac systolic function. It is the result of 4 specific cardiac rhythm disturbances: ventricular fibrillation (VF), pulseless ventricular tachycardia (VT), pulseless electrical activity, and asystole. Torsades de pointes is a subgroup of polymorphic VT in patients with an underlying prolonged QT interval, sometimes related to hypomagnesemia.

[Figure caption and citation for the preceding image starts]: Monomorphic ventricular tachycardiaFrom the personal collections of Dr A. Askari and Dr A. Krishnaswamy; used with permission [Citation ends]. 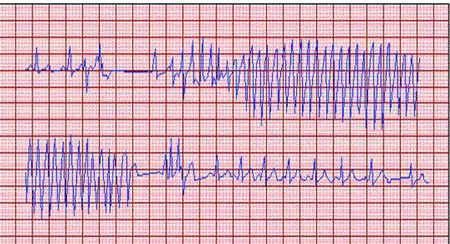 no return of spontaneous circulation

EL served as a consultant to the American Heart Association providing methods support using GRADE for cardiac arrest guidelines published in Circulation and Resuscitation in October 2015.

Professor Eddy Lang would like to gratefully acknowledge Dr Amar Krishnaswamy and Dr Arman T. Askari, previous contributors to this topic. AK and ATA declare that they have no competing interests.

AA declares that he has no competing interests.

MFP declares that he has no competing interests.