Inflammatory arthritis is a common term for several conditions that manifest as joint pain, swelling, and stiffness with varying degrees of functional impairment. These diseases can be broadly categorized as:

In patients with pain and swelling in a single joint, acute infection is a relatively common cause - one that can result in rapid and irreversible damage. In contrast, the majority of patients with involvement of multiple joints tend to have disorders of chronic duration. The prognosis is good for those who remain unclassifiable, with nearly 50% of such patients undergoing remission requiring no pharmacologic therapy at follow-up at 1 year.

[Figure caption and citation for the preceding image starts]: Acute monoarthritis of the right kneeFrom the collection of Dr Soumya Chatterjee [Citation ends]. 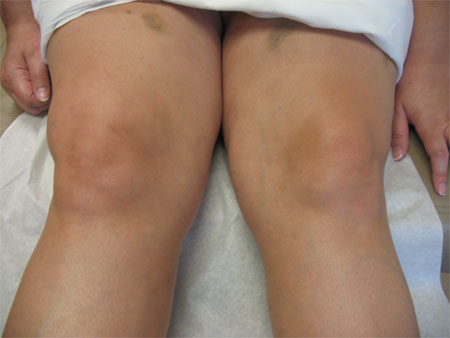 In addition to inflammatory joint diseases, joint pain can also be due to:

Pain due to an intra-articular pathology needs to be differentiated from referred pain arising from adjacent soft tissues or juxta-articular bone. In the context of referred pain, the range of motion of the joint is usually unaffected, and joint motion does not aggravate pain, whereas palpation over a regional bursa, tendon, or ligament can elicit pain.

It is usually not possible to detect all of the above features (especially swelling and erythema) in deep-seated joints such as the shoulders, hips, intervertebral joints, and sacroiliac joints.

Most causes of oligoarthritis (involving 2-4 joints) or polyarthritis (involving ≥5 joints) can also be causes of monoarthritis, because almost any arthritic condition can initially affect a single joint. The most important and serious condition that needs to be considered in the workup of an acute monoarthritis is septic (pyogenic) nongonococcal arthritis. If the diagnosis is missed and appropriate antimicrobial therapy is not instituted early, rapid destruction of articular cartilage can lead to irreversible joint damage.