Cerumen is a naturally occurring substance that cleans, protects, and lubricates the external auditory canal.

Impaction is diagnosed when an accumulation of cerumen results in symptoms, such as hearing loss, or when it prevents adequate assessment of the ear canal or tympanic membrane.

Intervention may include manual removal, irrigation, or use of cerumenolytic agents, or a combination of these modalities.

After treatment, the clinician should re-examine the patient's ear and document the resolution of the cerumen impaction, and also inspect the previously occluded tympanic membrane.

Young children, older patients, individuals with a cognitive impairment, and those in nursing homes are at high risk for cerumen impactions. Hearing-aid users are also at increased risk. These patients should be examined carefully for cerumen impaction during routine healthcare encounters. 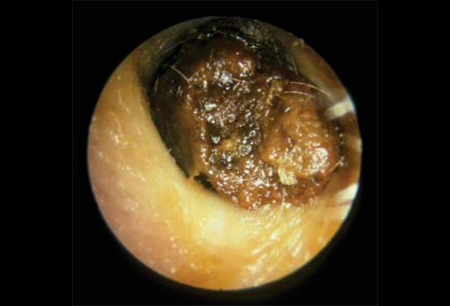 SW declares that he has no competing interests.

Associate Professor of Otolaryngology and Pediatrics

RKS declares that he has no competing interests.

The Listen For Life Center At Virginia Mason

SRS is an author of a reference cited in this topic.

RY declares that he has no competing interests.