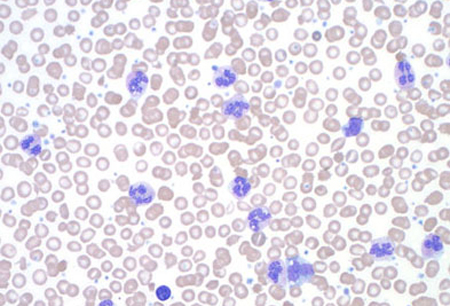 Bone marrow production of cells within the myeloid lineage is stimulated by interleukin 3 and granulocyte macrophage colony-stimulating factor. Granulocyte colony-stimulating factor, however, is responsible for catalyzing differentiation of early myeloid cells into mature neutrophils. Multiple signals induce neutrophil migration to the peripheral circulation from the marrow, including corticosteroids, endotoxins, complement-derived leukocyte-mobilizing factor, C5a chemoattractant, TNF-alpha, and androgens. When triggered, release of neutrophils from bone marrow storage triples circulating neutrophils within 4 hours. In addition to neutrophils contained within the bone marrow, circulation, and peripheral tissues, a moderate population adheres to the vascular endothelium and enters the circulation on demargination. Release of catecholamines, including epinephrine, results in almost immediate demargination and subsequent doubling of the peripheral neutrophil count.