Placenta praevia is an uncommon complication of pregnancy. Usually diagnosed on routine ultrasound done for other reasons, but may present with painless vaginal bleeding in the second or third trimester.

Classified according to the placental relationship to the cervical os as complete, partial, marginal, or low-lying.

Bleeding in placenta praevia may be (or become) torrential, and appropriate monitoring should be performed. Digital vaginal examination should not be performed on women with active vaginal bleeding until the position of the placenta is known with certainty.

Most seen on early ultrasound will resolve spontaneously.

Caesarean section will eventually be necessary in all cases of complete placenta praevia. Caesarean sections may be complicated by excessive bleeding and the need for caesarean hysterectomy (or uterine artery embolisation, or other interventional radiology procedure), and should only be performed by experienced physicians.

Placenta praevia (PP) is defined as the placenta overlying the cervical os. It can be complete, partial, marginal, or low-lying. Partial, marginal, and low-lying PP may resolve as pregnancy progresses. In women with a scarred uterus (most commonly from a prior caesarean section), PP may be associated with an abnormally adherent placenta, where the placenta attaches to the myometrial layer of the uterus. Vasa praevia, where the fetal vessels lie over the internal cervical os, is an associated condition.

In this topic we refer to all varieties of invasive placentation as abnormally adherent placenta. There are three commonly defined variants: placenta accreta (where chorionic villi attach to the myometrium, rather than being restricted within the decidua basalis), placenta increta (where the chorionic villi invade into the myometrium), and placenta percreta (where the chorionic villi invade through the myometrium and sometimes into adjoining tissue).[1]Publications Committee, Society for Maternal-Fetal Medicine, Belfort MA. Placenta accreta. Am J Obstet Gynecol. 2010 Nov;203(5):430-9. https://www.ajog.org/article/S0002-9378(10)01159-2/fulltext http://www.ncbi.nlm.nih.gov/pubmed/21055510?tool=bestpractice.com Although these distinctions are important to consultants, they do not change management decisions for primary care providers. 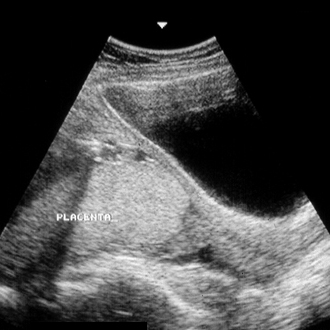 placenta praevia with no bleeding

with miscarriage or elective termination