A ventricular rhythm faster than 100 bpm lasting at least 30 seconds or requiring termination due to haemodynamic instability.

Sustained VT is usually observed in ischaemic and non-ischaemic cardiomyopathy, but idiopathic VT may also be observed in patients without structural heart disease.

Among patients with prior myocardial infarction or non-ischaemic cardiomyopathy, VT is usually due to re-entry involving regions of slowed conduction adjacent to scar.

Due to the unpredictable and life-threatening nature of most aetiologies of sustained VT, prophylactic implantable cardioverter defibrillator implantation is recommended in high-risk patients.

Sustained ventricular tachycardia (VT) is a ventricular rhythm faster than 100 bpm lasting at least 30 seconds or requiring termination earlier due to haemodynamic instability. VT is defined as a wide complex tachycardia (QRS 120 milliseconds or greater) that originates from one of the ventricles, and is not due to aberrant conduction (e.g., from bundle branch block), at a rate of 100 bpm or greater. 'Idiopathic' VT occurs in the absence of apparent structural heart disease (e.g., prior myocardial infarction, active ischaemia, cardiomyopathy, valvular disease, arrhythmogenic right ventricular cardiomyopathy, left ventricular non-compaction, or other disorders of the myocardium), known channelopathy (e.g., long QT syndrome, Brugada syndrome, catecholaminergic polymorphic VT, short QT syndrome), drug toxicity, or electrolyte imbalance. VT can be described as monomorphic or polymorphic. Torsades de pointes is a polymorphic VT with a characteristic twisting morphology occurring in the setting of QT interval prolongation. Sustained VT usually results in hypotension and symptoms of weakness, syncope, or palpitations; however, the arrhythmia may be present in patients who are asymptomatic and normotensive. 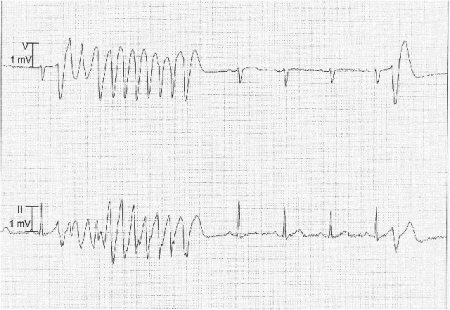