Atrial flutter is typically characterised on the ECG by flutter waves, which are a saw-tooth pattern of atrial activation, most prominent in leads II, III, aVF, and V1.

Ventricular rates range from 120 to 160 bpm, and most characteristically 150 bpm, because an associated 2:1 atrioventricular block is common.

This rhythm is commonly associated with atrial fibrillation, into which it may degenerate. Atrial fibrillation may also convert to atrial flutter. Because of alterations in atrial activation, the ECG often fluctuates between both rhythms in the same patient.

If a patient is haemodynamically unstable, they should be given emergency electrical cardioversion.

If a patient is haemodynamically stable, the first-line treatment is rate control and management of the underlying cause.

If the rhythm persists in a haemodynamically stable patient, despite rate control and treatment of the underlying cause (or in the absence of a reversible cause), electrical cardioversion is used to terminate the arrhythmia.

Typical atrial flutter (anticlockwise cavotricuspid isthmus-dependent atrial flutter) is a macro re-entrant atrial tachycardia with atrial rates usually above 250 bpm up to 320 bpm. It results from organised electrical activity in which large areas of the atrium take part in the re-entrant circuit. The typical form depends on the so-called cavotricuspid isthmus for part of the circuit: tricuspid annulus as the anterior boundary and the crista terminalis/eustachian ridge as the posterior boundary, as well as the endocardial cavity of the right atrium. The term anticlockwise refers to the direction of activation when the tricuspid annulus is viewed en face, whereby activation occurs up the septum, down the right atrial free wall in an anticlockwise fashion. Characteristic features on ECG are negatively directed saw-tooth atrial deflections (f waves) seen in leads II, III, and aVF, with positively directed deflections in lead V1.[1]Estes NA 3rd, Halperin JL, Calkins H, et al; American College of Cardiology; American Heart Association Task Force on Performance Measures; Physician Consortium for Performance Improvement. ACC/AHA/Physician Consortium 2008 clinical performance measures for adults with nonvalvular atrial fibrillation or atrial flutter. J Am Coll Cardiol. 2008 Feb 26;51(8):865-84. http://www.ncbi.nlm.nih.gov/pubmed/18294574?tool=bestpractice.com 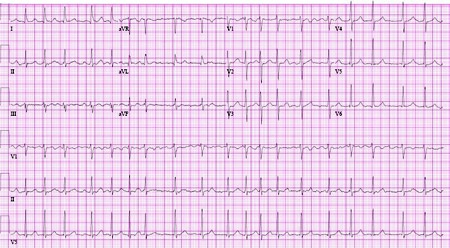