An inflammatory disorder involving both the peripheral bronchioles and alveoli simultaneously. It has distinctive radiographic findings, histological features, and response to corticosteroids (unlike usual interstitial pneumonia).

Accounts for 20% to 30% of all cases of chronic infiltrative lung diseases. It occurs equally among men and women, and is not related to smoking.

Lung biopsy may be required to establish the definitive diagnosis in patients with unusual findings or severe disease.

Idiopathic BOOP is treated with corticosteroids.

Cases with an underlying cause (e.g., drug-related BOOP) should have the causative factor removed; corticosteroid therapy is indicated in some cases. 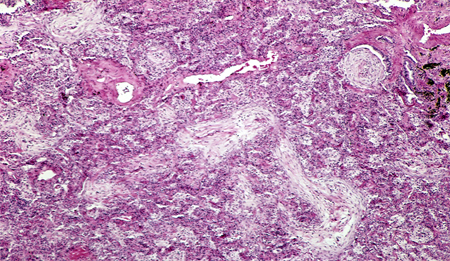 However, the author uses the term BOOP because it continues to be recognised and used throughout the world. It is a specific pulmonary lesion recognised by pathologists with a characteristic clinical pattern and response to treatment. BOOP is simultaneous inflammation of the distal bronchiolar airways, respiratory bronchioles, alveolar ducts, and alveoli. BOOP is a diffuse interstitial parenchymal disease and acinar disease and not an airway disease, especially because of the presence of crackles, decreased diffusing capacity, no airflow obstruction, and high-resolution chest CT scans showing triangular-shaped, ground glass opacities with air bronchograms.

BOOP is not confused with obliterative bronchiolitis because BOOP is a diffuse parenchymal lung disease and not an airway disease; wheezing is not a common symptom of BOOP; crackles, and not wheezes, are heard by auscultation in BOOP; the FEV1/FVC ratio is normal or slightly increased in BOOP, not decreased as in airway obstructive diseases; and the radiographic findings show bilateral patchy infiltrates, not normal or hyperinflation seen in airflow obstructive diseases.

Finally, the term BOOP is easy for patients to remember and use to advance their understanding of the disease process by obtaining accessible scientific publications.

GRE is an author of several references cited in this monograph.

Professor of Medicine and Director

TLC has been reimbursed by the American College of Chest Physicians (ACCP), American Academy of Sleep Medicine, American Thoracic Society, and Cephalon, the manufacturer of modafinil, for attending several conferences. He has been paid by the ACCP for running educational programs and by Elsevier for serving as consultant of the Sleep Medicine Clinics. He has also received research funding from the National Institutes of Health, Respironics, Restore, and Schwarz Pharma, and has been a member of the speakers' bureau for GlaxoSmithKline.