Hereditary spherocytosis is an inherited abnormality of the red blood cell, caused by defects in structural membrane proteins. It is the most common form of inherited haemolytic anaemia in the US and northern Europe. The severity of resultant haemolysis is related to the type and amount of membrane disruption.

May be diagnosed at any age. The key laboratory features are the presence of spherocytes on the blood smear in association with a negative direct anti-globulin test (DAT) and an elevated reticulocyte count.

May be newly diagnosed in children who present with severe anaemia due to parvovirus infection. Patients may also be completely asymptomatic. In these cases, hereditary spherocytosis (HS) may be detected on a blood count/smear done for other reasons.

Management depends on the severity of the haemolysis and degree of anaemia, but is generally supportive for most patients.

Splenectomy is the treatment of choice in patients with severe HS. This is best avoided until at least 6 years of age to reduce the risk of post-splenectomy sepsis.

Hereditary spherocytosis (HS) is an inherited abnormality of the red blood cell, caused by defects in structural membrane proteins. The condition is dominantly inherited in 75% of people. The severity of the disorder is related to the type and amount of membrane disruption, which is genetically determined. The abnormal cells are spherical. They are removed by the spleen, resulting in a reduced red-cell life span that deviates from the normal of 120 days by a variable degree. In severe cases, red-cell life span may be only 10 days. The severity of haemolysis varies between different individuals and can be exacerbated by infection. HS is associated with splenomegaly (commonly), anaemia (variably) with an increased reticulocyte count, and jaundice (occasionally). 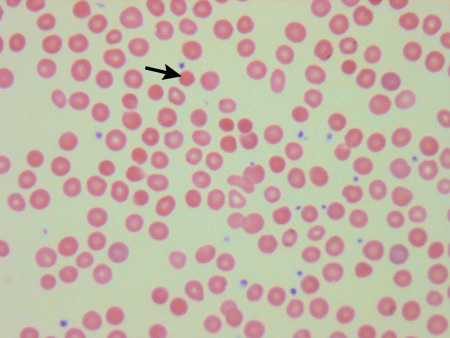