Assessment of cyanosis in the newborn

Initial assessment of infants with cyanosis should include:[4]Sasidharan P. An approach to diagnosis and management of cyanosis and tachypnea in term infants. Pediatr Clin N Am. 2004 Aug;51(4):999-1021. http://www.ncbi.nlm.nih.gov/pubmed/15275985?tool=bestpractice.com

Important features of maternal history, which are associated with neonatal cyanotic disorders, include:

Factors relating to labour and delivery

Cyanosis can develop immediately or several hours after birth.

In a cold environment, acrocyanosis is common. Examination should be performed under a radiant warmer in a well-lit room. Prolonged capillary refill time is often evident when peripheral perfusion is suboptimal in:

Tachypnoea, retractions, nasal flaring, and grunting generally indicate a pulmonary cause. However, these symptoms may also occur in cardiac conditions with significant left-to-right shunt or in sepsis/shock syndromes. The respiratory rate may be normal in infants with cyanotic heart disease or methaemoglobinaemia. Apnoea and cyanosis may be due to sepsis, asphyxia, or seizures.

Upper airway obstruction may be evident from stridulous breathing due to:

Upper airway obstruction can also give rise to supraclavicular, submandibular, and suprasternal retractions. Bilateral choanal atresia generally gives rise to significant retractions at birth, but the symptoms are relieved by an oral airway. Cyanosis due to parenchymal lung disease is associated with intercostal and subcostal retractions.

Absent/poor aeration of one side of chest on auscultation may be due to:

Normal heart rate in full-term newborns is approximately 120 beats per minute (bpm), with a range of 100 to 140 bpm. During quiet states it may be as low as 90 bpm. Heart rates >160 bpm during quiet state are abnormal. In supraventricular tachycardia, heart rates >200 bpm are usually seen. Heart rate variability is also important: in severe sepsis and asphyxia, the beat-to-beat variability will be lost. S2 is loud and narrowly split in pulmonary hypertension.

A single S2 is generally indicative of:

It is important to record the type and quality of murmurs. The location of apical impulse should be noted to rule out dextrocardia. Precordial thrill indicates significant murmur of grade >3/6. Precordial hyperactivity is generally due to increased ventricular activity. It should be remembered that not all heart murmurs are pathological and that many serious congenital cardiac conditions do not cause murmurs.

The abdomen may appear scaphoid in congenital diaphragmatic hernia. Abdominal distension due to bowel obstruction or ascites can give rise to respiratory distress. Hepatosplenomegaly with ascites and hydrops fetalis may occur in cases of severe haemolytic disease of the newborn, a potential cause of severe respiratory distress. Hepatomegaly can co-exist with pulmonary congestion in conditions such as total anomalous pulmonary venous return. Absence of bowel sounds indicates ileus and is associated with sepsis, gangrenous bowel, or peritonitis.

Hypotonia is one of the earliest signs of:

Phrenic nerve paresis/paralysis can precipitate respiratory distress and is associated with Erb's palsy following traumatic vaginal delivery. Excessive traction on the neck or vaginal breech extraction are the common aetiologies.

Chest x-ray is integral to initial assessment of respiratory distress.[4]Sasidharan P. An approach to diagnosis and management of cyanosis and tachypnea in term infants. Pediatr Clin N Am. 2004 Aug;51(4):999-1021. http://www.ncbi.nlm.nih.gov/pubmed/15275985?tool=bestpractice.com [9]Kurl S, Heinon KM, Kiekara O. The first chest radiograph in neonates exhibiting respiratory distress at birth. Clin Pediatr (Phila). 1997 May;36(5):285-9. http://www.ncbi.nlm.nih.gov/pubmed/9152555?tool=bestpractice.com [10]Cleveland RH. A radiologic update on medical diseases of the newborn chest. Pediatr Radiol. 1995;25(8):631-7. http://www.ncbi.nlm.nih.gov/pubmed/8570317?tool=bestpractice.com The location of stomach, liver, and heart should be ascertained to rule out dextrocardia and situs inversus.

The size and shape of the heart may yield some clues to the diagnosis:

Pulmonary vascular markings may yield further clues towards the diagnosis:

The expansion of lungs (lung volume) on both sides should be checked. Normal inspiratory films should have 8 intercostal spaces of lung fields on both sides. Diaphragmatic paralysis (more commonly seen on the right side) is manifested by elevation of the right hemidiaphragm by more than 2 intercostal spaces compared with the left side. This may simulate right lower lobe atelectasis. Hyperinflated lung fields are seen occasionally in lobar emphysema or cystic lesions of lungs. The prevalence of spontaneous air leaks giving rise to pneumothorax and pneumomediastinum in full-term newborns is approximately 1% to 2%. 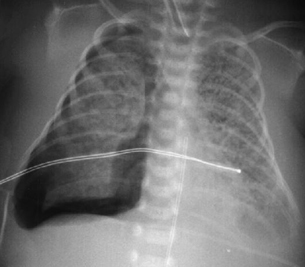 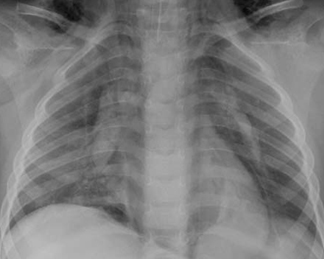 [Figure caption and citation for the preceding image starts]: Pneumomediastinum without pneumothoraxFrom the collection of Ponthenkandath Sasidharan, MD; used with permission [Citation ends]. 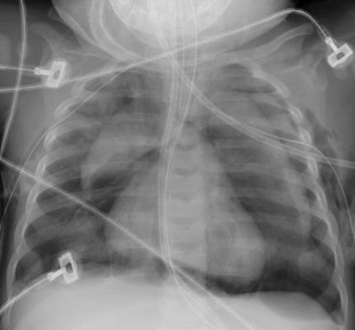 Some characteristic pulmonary findings on chest x-ray are associated with specific pathologies:

It is important to check the bony thoracic cage. In asphyxiating thoracic dystrophy, the thoracic cage will be small and narrow. The thorax may have a bell-shaped appearance in infants with severe hypotonia. Fractures of the ribs, humerus, or clavicles should be looked for following difficult vaginal deliveries, as infants may develop respiratory distress from the pain and splinting of the chest.

Ultrasound examination of diaphragmatic motion during spontaneous breathing can detect paradoxical motion in diaphragmatic paralysis. Pleural effusion, eventration of the diaphragm (an abnormal elevation of an intact diaphragm), and size/location of the liver/spleen can also be determined.

Computed tomography scan of the chest is occasionally helpful if diagnosis is not clear, and it can identify congenital abnormalities and tumours of the mediastinum, lungs, and heart. Feeding-associated cyanosis may be due to incoordination of sucking and swallowing, gastro-oesophageal reflux, vocal cord paralysis, laryngeal cleft, severe birth asphyxia, or tracheo-oesophageal fistula. A paediatric gastroenterologist may recommend a pH probe test or upper gastrointestinal contrast study to rule out severe gastro-oesophageal reflux.

ABG can help in determining the oxygenation, ventilation, and acid-base status of the infant. In methaemoglobinaemia, the PaO₂ is normal even with cyanosis. Elevated serum lactate is indicative of inadequate oxygen delivery.

FBC with differential count is an important test to rule out polycythaemia, anaemia, neutropenia, leukopenia, abnormal I:T (immature to total neutrophil count) ratio, and thrombocytopenia as signs of sepsis.

Significant metabolic acidosis may indicate cardiac failure, sepsis, asphyxia, or metabolic disorders. Closure of the ductus arteriosus in an infant with a ductal-dependent cardiac lesion can lead to shock and severe metabolic acidosis with cyanosis and respiratory distress.

Accurate blood glucose measurement is essential for diagnosis and management of neonatal hypoglycaemia. Local protocols and guidelines on optimal blood sampling and measurement should be followed.[20]British Association of Perinatal Medicine. Identification and management of neonatal hypoglycaemia in the full term infant - a framework for practice. 30 April 2017 [internet publication]. https://www.bapm.org/resources/40-identification-and-management-of-neonatal-hypoglycaemia-in-the-full-term-infant-2017

Calcium and magnesium levels should be obtained where other causes have been ruled out. Hypocalcaemia and hypomagnesaemia are both associated with central nervous system irritability and seizures.

Echocardiogram is the definitive test in the diagnosis of congenital cardiac lesions and pulmonary hypertension. A technician who is trained in performing echocardiograms in newborns and a paediatric cardiologist are required for this procedure.