Just as with awake and communicative patients, the history is vital. This must be obtained from relatives, friends, and eyewitnesses, by phone if necessary. How the patient took ill or collapsed can give important clues. Did the patient have a seizure? Was trauma involved? Did the patient lose consciousness gradually, or was there fluctuation, as might be seen in metabolic disorders or subdural haematoma? Was the patient febrile or having chills (suggesting a central nervous system or systemic infection)? The background of the patient can be important. Did the patient have cancer, profound depression (raising the possibility of drug overdose), or a history of drug or alcohol abuse? Is there an underlying illness, such as diabetes mellitus, adrenal, hepatic, or renal failure, or immunosuppression (either drug-induced or acquired)? What drugs was the patient taking? Hospital records can be helpful, as can medical alert bracelets or other medical information on his/her person.

[Figure caption and citation for the preceding image starts]: The principal toxidromes, a constellation of features peculiar to certain classes of drugsTable created by G. Bryan Young, MD; used with permission [Citation ends].

The general examination can give important clues.

The GCS is commonly used to grade the severity of the impairment of consciousness.[73]Zuercher M, Ummenhofer W, Baltussen A, et al. The use of Glasgow Coma Scale in injury assessment: a critical review. Brain Inj. 2009 May;23(5):371-84. http://www.ncbi.nlm.nih.gov/pubmed/19408162?tool=bestpractice.com [ Glasgow Coma Scale ] It was initially designed to assess trauma patients in the emergency department, but it is commonly used to track the progress or worsening of intensive care unit (ICU) patients. There are better scales for documenting and following the depth of coma in ICU patients: for example, the Reaction Level Scale -85[74]Starmark JE, Holmgren E, Stalhammar D. Current reporting of responsiveness in acute cerebral disorders. J Neurosurg. 1988 Nov;69(5):692-8. http://www.ncbi.nlm.nih.gov/pubmed/3054012?tool=bestpractice.com and the FOUR scoring system.[75]Wijdicks EF, Bamlet WR, Maramattom BV, et al. Validation of a new coma scale: the FOUR score. Ann Neurol. 2005 Oct;58(4):585-93. http://www.ncbi.nlm.nih.gov/pubmed/16178024?tool=bestpractice.com [76]Wijdicks EF, Kramer AA, Rohs T Jr, et al. Comparison of the Full Outline of UnResponsiveness score and the Glasgow Coma Scale in predicting mortality in critically ill patients. Crit Care Med. 2015 Feb;43(2):439-44. http://www.ncbi.nlm.nih.gov/pubmed/25393699?tool=bestpractice.com The FOUR Score external link opens in a new window These are more suitable for patients who are intubated, have more categories or levels, and include more aspects of the neurological examination.

[Figure caption and citation for the preceding image starts]: FOUR scoring systemTable created by G. Bryan Young, MD; used with permission [Citation ends]. The FOUR score has also been shown to be useful in the emergency department.[77]Stead LG, Wijdicks EF, Bhagra A, et al. Validation of a new coma scale, the FOUR score, in the emergency department. Neurocrit Care. 2009;10(1):50-4. http://www.ncbi.nlm.nih.gov/pubmed/18807215?tool=bestpractice.com

It is important to localise the anatomical-physiological site of the coma. Usually if the brainstem functions are preserved, the site is more rostral or the brain has been affected in a diffuse manner that relatively spares the more resistant cranial nerve nuclei. However, there are some caveats. Some specific aspects of findings on neurological examination are worth noting.

Oculomotor signs associated with herniation include:

Arterial or capillary blood gas determination can be very helpful in the presence of hyperventilation and occasionally in hypoventilation and for some toxidromes. ABG analysis is readily available and of some confirmatory value in psychogenic unresponsiveness. In pseudoseizures, blood gases are usually normal or may show a respiratory alkalosis from hyperventilation, as opposed to the profound, mixed metabolic-respiratory acidosis of a convulsive seizure. The correlation of basic respiratory patterns with blood gas determination can narrow the differential diagnostic possibilities considerably, as follows:

Serum glucose, calcium, sodium, potassium, magnesium, phosphate, urea, and creatinine should also be checked to evaluate the cause of syncope, fainting, or seizure and to assess for the presence of electrolyte disorders.

Once the differential has been narrowed, further laboratory tests can be performed according to the suspected cause:

Imaging is essential when there is a strong possibility of a structural brain lesion or for diagnosing specific disorders. A CT head scan is most commonly used, as it is quick, available, and requires less preparation than an MRI scan. CT is sensitive to intracranial haemorrhages, major shifts of midline structures, and mass effect. 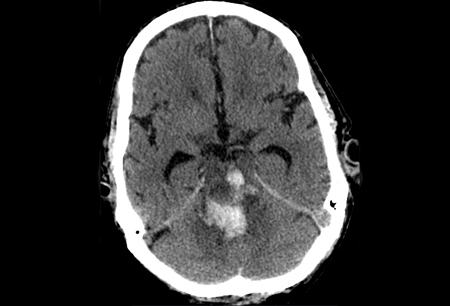 [Figure caption and citation for the preceding image starts]: Brainstem haemorrhage in the midbrain that extended from a hypertensive haemorrhage in the ponsFrom the personal collection of G. Bryan Young, MD; used with permission [Citation ends]. 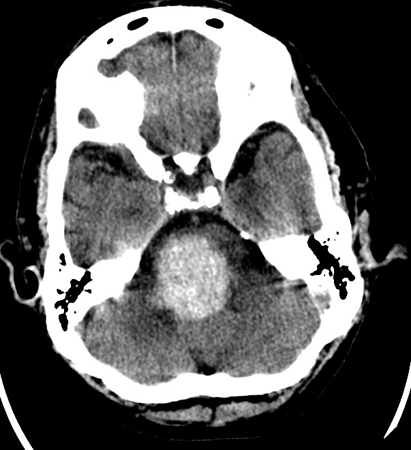 [Figure caption and citation for the preceding image starts]: Hypertensive haemorrhage in the pons that ruptured into the fourth ventricle and extended into the midbrainFrom the personal collection of G. Bryan Young, MD; used with permission [Citation ends].Patients with mass lesions (e.g., brain abscess, tumour, intracerebral hemorrhage, trauma with intracerebral or extracerebral haematoma) and herniation syndrome require urgent imaging. CT is usually more readily available and faster than MRI, but MRI can provide more detail. An unenhanced CT is usually performed first, then contrast CT if necessary to clarify the nature of mass (e.g., differentiation of tumour from brain abscess). MRI is usually performed later and can be helpful in showing multiple lesions (e.g., metastases) or in showing the vascular supply to a vascular malformation that has bled.

Focal signs, such as a hemiparesis or an oculomotor palsy in a comatose patient, should also prompt a scan. However, coma may precede such focal signs in patients with supratentorial mass lesions. Thus, neuroimaging is also indicated when structural lesions are possible or if the diagnosis is uncertain.

Lumbar puncture is indicated if there is suspicion of meningitis, especially bacterial, fungal, or tuberculous, and for detecting meningeal cancer. Lumbar puncture can also confirm SAH from a ruptured aneurysm when CT has not detected it (5% of cases). Xanthochromia, a yellow staining of the CSF from haemoglobin breakdown products, can be suspected clinically and confirmed by spectrophotometry. More specific diagnostic testing, apart from culture, stains, cytology, and flow cytometry, include polymerase chain reaction (PCR) for herpes simplex virus (HSV) 1 and 2, broad-range bacterial PCR, specific meningeal pathogen PCR, PCR for Mycobacterium tuberculosis, reverse transcriptase (RT) PCR for enteroviruses, PCR for West Nile virus, PCR for Epstein-Barr virus, PCR for varicella zoster virus, PCR for cytomegalovirus DNA, PCR for HIV RNA, and RT-PCR for rabies virus. Antigen screening can be done for cryptococcal and histoplasma polysaccharide antigens. Antibody screens in the CSF are available for HSV (serum-to-CSF antibody ratio of <20:1), arthropod-borne viruses, Borrelia burgdorferi (for suspected Lyme disease), and rabies virus; complement fixation antibody testing for Coccidioides immitis can also be performed. CSF analysis may also help in the diagnosis of acute inflammatory demyelinative polyneuropathy (in cases of locked-in state).

Seizures may also be acquired in the ICU, especially in those with structural brain lesions. It has been demonstrated that at least 8% of patients comatose from brain injury are in NCSE.[30]Young GB, Doig GS. Continuous EEG monitoring in comatose intensive care unit patients: epileptiform activity in etiologically distinct groups. Neurocrit Care. 2005;2(1):5-10. http://www.ncbi.nlm.nih.gov/pubmed/16174961?tool=bestpractice.com [84]Towne AR, Waterhouse EJ, Boggs JG, et al. Prevalence of nonconvulsive status epilepticus in comatose patients. Neurology. 2000 Jan 25;54(2):340-5. http://www.ncbi.nlm.nih.gov/pubmed/10668693?tool=bestpractice.com Most often this is undetectable without EEG. Because status epilepticus can damage the brain, it is important that the seizures be detected early and treated promptly and effectively. The liberal use of EEG in the ICU is helpful; continuous monitoring for at least 72 hours increases the NCSE diagnostic yield and, in patients with seizures, provides feedback that the seizures are controlled and that the sedation/anaesthesia is not excessive.

EEG demonstrates different patterns (e.g., slow pattern, burst-suppression pattern, isoelectric pattern). These features are not specific to aetiology and are mainly used to grade the severity of the encephalopathy. The most profound abnormality is generalised suppression of voltage/electrocerebral silence, then a burst-suppression pattern. These are common in very severe cases of anoxic-ischaemic encephalopathy after cardiac arrest, but they may be found in more reversible encephalopathies due to overdose of barbiturates, benzodiazepines, anaesthetic agents, or profound hypothermia. Diffuse slowing with rhythmic waves or triphasic waves indicates a somewhat less severe but still profound encephalopathy, usually but not invariably due to metabolic derangements such as uraemia, hepatic failure, or sepsis.

In cases of unresponsiveness, EMG can help to exclude a neuromuscular cause: for example, neuromuscular blockade from the prolonged action of muscle relaxants and profound, diffuse polyneuropathies (e.g., acute inflammatory demyelinative polyneuropathy and the axonal form of Guillain-Barre syndrome).

The prognosis of patients with severe diffuse axonal injury (DAI) can be estimated using:

The prognosis of patients with anoxic-ischaemic encephalopathy after cardiac arrest can be estimated using:

The prognosis of patients with carbon monoxide poisoning may be estimated using:

The prognosis of patients in coma is often difficult. However, some advances have been made in the application of ancillary testing: