Doppler (duplex) ultrasonography is recommended for all patients with suspected SVT of the lower limb, as concomitant deep vein thrombosis (DVT) may be present.

Underlying prothrombotic conditions should be sought in cases of recurrent SVT and migratory SVT, especially in the absence of varicose veins.

Anticoagulation to prevent venous thromboembolic complications (DVT or pulmonary embolism) is warranted, especially in patients with SVT near the saphenofemoral junction, or when the superficial thrombus is 5 cm or greater in length.

Superficial vein thrombophlebitis (SVT, also known as superficial venous thrombosis) refers to thrombus formation in a superficial vein, and inflammation in the tissue surrounding the vein.[1]Nasr H, Scriven JM. Superficial thrombophlebitis (superficial venous thrombosis). BMJ. 2015 Jun 22;350:h2039. http://www.ncbi.nlm.nih.gov/pubmed/26099257?tool=bestpractice.com It is generally characterised by pain, tenderness, induration, and/or erythema in a superficial vein. There is often a palpable, sometimes nodular, cord with warmth and erythema, which suggests the presence of thrombus. It most often occurs in the saphenous vein of the lower limbs, and its tributaries. It can also occur in the veins of the upper limbs or neck, usually due to intravenous cannulation and drug administration. The term SVT is generally reserved for the specific problem of SVT in the lower limbs. This topic will concentrate on lower-limb SVT.

extension into the femoral vein or popliteal vein, <2 cm from the saphenofemoral junction, or concomitant DVT or PE

SVT: ≥5 cm in length and/or within 3-5 cm of the saphenofemoral junction

SVT: <5 cm in length on localised venous ectasia (varicophlebitis), not within 3-5 cm of the saphenofemoral junction, no risk factors for VTE

SVT: <5 cm in length on localised venous ectasia (varicophlebitis), not within 3-5 cm of the saphenofemoral junction, at least one risk factor for VTE 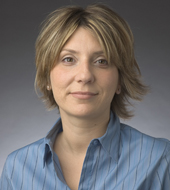 VT has received reimbursement for advisory board work for Servier and Pzifer. Both of these companies are makers of anticoagulants. VT has received an investigator-initiated grant from Sanofi, manufacturer of Enoxaparin.

Professor Vicky Tagalakis would like to gratefully acknowledge Frédérique St-Pierre, a medical student who worked with her to update this topic. FSP declares that he has no competing interests.

Division of Angiology and Hemostasis

The Mary Weinfeld Professor of Clinical Research in Hemophilia

LA declares that he has no competing interests.