Using our evidence tables and scores

Keeping up with the evidence supporting all the clinical decisions faced during a typical day is a huge challenge for healthcare professionals. It’s a full-time job to find reliable and relevant evidence for clinical decisions, especially considering the large and ever increasing quantity of published trials. Even when evidence is readily available in an evidence-based guideline or systematic review, the clinical question may not be entirely clear or quite ‘fit’ with the patient in front of you. There may be important gaps in the information, and it can be hard to judge the certainty of the results and how they compare with other studies.

BMJ Best Practice evidence tables are a clinical decision support add-on, which present easily navigated layers of evidence in the context of specific clinical questions. They provide the reader with information as to how reliable the evidence underpinning the clinical question is.  When reading about a clinical intervention in a topic in BMJ Best Practice, look out for the evidence scores and simply choose the level of information you require. This could be:

Why do the evidence tables and scores focus on GRADE?

GRADE (Grading of Recommendations, Assessment, Development and Evaluations) is a transparent framework for presenting summaries of evidence. It provides a rating of the evidence quality or certainty in the evidence.  This rating is the focus for our evidence scores and is included in our evidence tables. In addition, GRADE can be used to evaluate the strength of a recommendation and is considered the standard in guideline development. Around 100 organisations currently endorse the GRADE process, including the World Health Organization WHO), the National Institute for Health and Care Excellence (NICE) and the Scottish Intercollegiate Guidelines Network (SIGN). It is also increasingly used in individual systematic reviews. For more information, see our topic on ‘What is GRADE?’

What information will I find in the BMJ Best Practice evidence tables?

Throughout all of BMJ Best Practice, we aim to highlight evidence that is clinically relevant and accessible, important to patients, current and potentially practice changing. Our evidence tables focus on this type of evidence too. They summarise high-quality systematic reviews and evidence-based guidelines but only where there is clear reporting on:

In order to practise evidence-based medicine, we need to firstly translate an information need into a relevant and clear clinical question. [1] That is why the first row in our evidence tables always contains a clinical question. To increase the benefit to patients and health care practitioners, we have only selected questions that have been answered in high-quality systematic reviews and evidence-based guidelines, some of which have involved patients in their development processes. Each question is related to relevant information in a topic in BMJ Best Practice. You’ll also see the clinical question in a pop up box if you click on the evidence score in the relevant BMJ Best Practice topic. 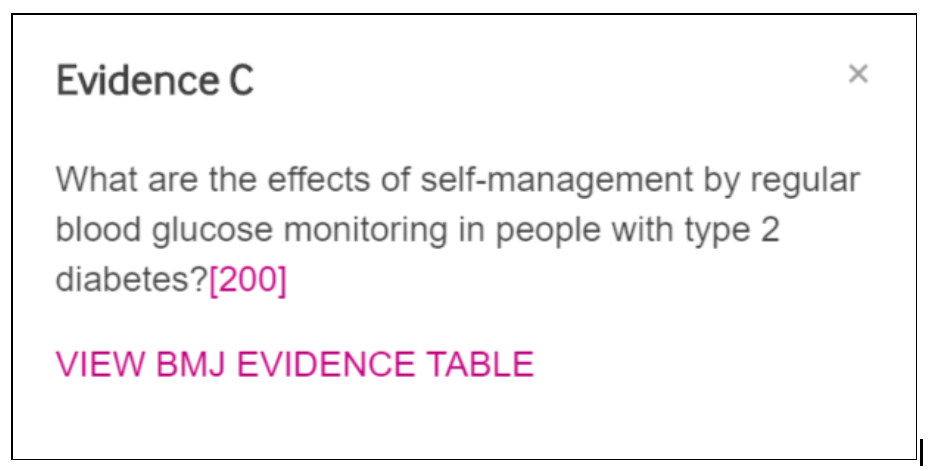 Each clinical question is referenced by a single systematic review or evidence-based guideline.

You will see the BMJ Best Practice evidence score highlighted at the top of the table. The score is a simple A, B or C rating.  See below for more information on the score, what it means and how it has been calculated.

The evidence score and the link through to its associated evidence table is also placed next to relevant text in the BMJ Best Practice topic.

Knowing the PICO helps you to check on the relevance of the evidence to the individual patient and clinical setting.

The outcomes (‘O’ in the PICO) are listed in the main body of the table in separate rows for transparency. The tables may not include every outcome reported in each study, especially where the researchers have added data from subgroup analyses. Instead the tables focus on the most important patient-related outcomes. These are usually either reported as ‘primary outcomes’, or ‘critical or important outcomes’. We aim to include ‘Adverse events’ where these have been reported by the study.  It is important that potential harms are considered along with benefits when making clinical decisions on which interventions to use.

Alongside each outcome included in the table are two columns which show:

Effectiveness categories are allocated by the BMJ Best Practice evidence team, who review the statistical data on effect reported in the systematic review or guideline. Systematic reviews and guidelines often present these data in tables, and where meta-analyses have been carried out, in forest plots. Typically, the relative effect of an intervention versus a comparison is reported as relative risk (RR), odds ratio (OR) or mean difference (MD), each with an associated 95% confidence interval (95% CI).  For simplicity, to allow a quick assessment of the direction of effect, we have translated this numerical statistical data into the following categories:

It is important to note that these categories are based on statistical significance. This shows that results are unlikely to be due to chance, but this does not necessarily translate to clinical significance. Sometimes, for instance, the tables may include ‘‘No statistically significant difference '’ for a particular outcome, but a deeper delve into the evidence in the original report may still lead to a recommendation of one treatment over another.  A small statistically insignificant effect could be considered ‘clinically important’.  Where this is the case a footnote in our evidence table will briefly explain what the recommendation or authors’ conclusion was based on. More detail can be found for those who want to delve further by clicking on the links to the original report via our table.

The column for GRADE includes one of four possible ratings as follows:

The BMJ Best Practice evidence tables include the GRADE assessment as reported by the researchers in the source systematic review or guideline. The GRADE assessment helps gauge the certainty in the evidence on the effectiveness for each outcome compared with the comparison, i.e. how much we can trust the result. It follows a systematic process, although different assessors may reach different decisions on assessment results, so this is usually done by more than one person so a consensus is reached. For more information on GRADE, see ‘What is GRADE?'

When a guideline has been used as the basis of an evidence table you will see a row in the table for the relevant ‘Recommendations as stated in the source guideline’ associated with the evidence in the table. This is extremely useful when unpicking how the evidence has been interpreted for clinical guideline recommendations. Some tables also have a row for additional notes, which may help explain the ‘evidence to recommendations’ process further. The notes may also help clarify the overall BMJ Best Practice evidence score rating.

Full text source for the original systematic review or guideline

Each table will always include a link to the full text of the original study that our tables are based on. BMJ Best Practice evidence tables provide a simple summary of the key outcomes to help you extract information quickly. The full text link allows you to look at the detail in the original source if you need more detail, for instance, on the numerical data.

How do we calculate the evidence score?

Notes included in the table have been added to help further clarify how the decision on the evidence score was reached.